Long before legislation was drafted to create technical colleges in the state, the citizens of Northwest Kansas recognized a need to close the gap and provide technical education to the region.  The early 1960's was a time of national social and economic turmoil, yet change was on the horizon, and amidst growing industry demand for skilled workers, a vision began to form. It was a vision of an educated workforce, of young entrepreneurs learning a trade and opening businesses, and of the creation of an institution of higher learning for the future of Northwest Kansas.

The vision began to take shape with the help of the Vocational Education Act of 1963, which provided congressional support for the establishment of vocational/technical schools across the nation. On August 28, 1964, the vision finally became a reality when Northwest Kansas Area Vocational Technical School opened its doors for the first class of students. With over 105 students studying both full-time and part-time during the first year, it became apparent quickly the college would be running out of space.  With eight technical programs tailored to address workforce needs in the area, the school was well positioned to have an immediate impact on the local and regional economy.

School enrollment multiplied during the late 1960's and leveled off during much of the 1970's with enrollment running steadily around 350 students taking courses each year. The school consistently produced graduates in many core programs including automotive technology, business technology, cosmetology, diesel technology and several other programs. During this time the footprint of the college grew, and numerous new buildings were added to accommodate the growth of enrollment. Facilities included both new classroom buildings as well as the addition of campus housing.

The addition of housing transformed the campus from a commuter school to a residential school and provided more significant opportunity for recruiting students looking for a traditional campus experience and a technical education. 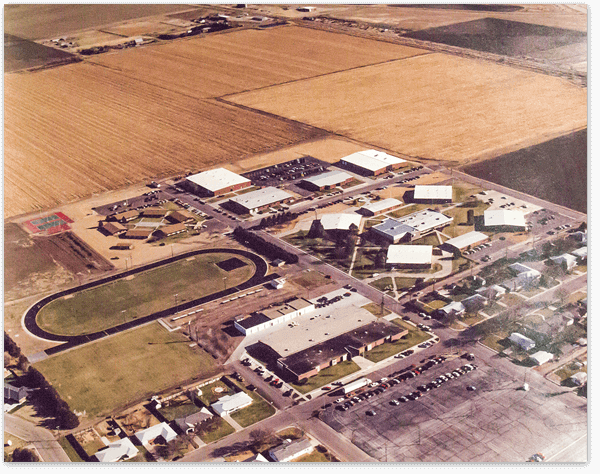 Through the stable stewardship of school administrators, the footprint of the college has grown tremendously, facilities and programs have expanded, and students graduated in droves.  The sturdy foundation laid during the early years of the school paved the way for eventual changes in higher education and provided the type of stability that would allow a small rural vocational-technical school to transition to a degree-granting technical college in the coming years.

By the late 1990’s and early 2000’s the higher education landscape in Kansas was changing; especially for technical schools. In early 1999, the Kansas Legislature enacted Senate Bill 345, which would move the two-year colleges and technical schools out from under the purview of the Kansas Department of Education and under the coordinating authority of the Kansas Board of Regents. For decades, the school had partnered with Colby Community College to allow students with a technical certificate to complete an Associate of Applied Science. But all of that was about to change.

Only two short years later, in early 2001, the legislature passed House Bill 2001, which changed the name of Northwest Kansas Area Vocational Technical School to Northwest Kansas Technical College. In addition to the name change, the legislative action also required each of the technical colleges in the state to pursue accreditation through the Higher Learning Commission. In one stroke of Governor Bill Graves pen, this piece of legislation paved the way for the college to seek regional accreditation through the Higher Learning Commission.

After applying for candidate status and completing all of the rigorous requirements necessary for regional accreditation, on May 15, 2007, Northwest Kansas Technical College received regional accreditation from the Higher Learning Commission. This transformative moment catapulted the reputation and image of the college and allowed for the offering of fully accredited Associate of Applied Science degrees and technical certificates.

By 2010, enrollment from regional high schools was beginning to wane in response to declining community populations. To help address the decline, the college decided to add an NJCAA athletic program to the institutional portfolio. In addition to a boost in enrollment, the addition of athletics provided several new student life activities as well as strengthened ties with the local Goodland community. By launching an official athletic program, Northwest Tech became the first (and currently only) technical college in the state of Kansas to have collegiate-level athletics.

Northwest Tech, as it is more commonly known today, is among the most successful two-year colleges in the nation in our ability to graduate students. Few other colleges are as successful as Northwest Tech in bringing students all the way from their first day at freshman orientation to the stage at graduation. Today, we have 15 core technical programs and the student body is made up of students from around the state, nation, and across the globe.

Enrollment has continued to climb with the on-campus student body drawing over 400 students.  As we look out into communities in the area, an additional 450 high school students are taking college credits while they finish their high school diploma. In addition to the number of students the college serves, it generates an estimated $12 million in annual economic impact, making it among the most significant economic drivers of the local economy.

Business and industry have always been the driving force behind the story of Northwest Tech, and the college continues to experience incredible demand for skilled and educated workers.  This environment creates numerous job opportunities for graduates resulting in several decades during which nearly every program at the college has consistently experienced over 95% job placement.

The college has been a dynamic force in technical education in Kansas, and the future shines brightly. With a growing social awakening that there is just as much need for electricians, mechanics, and welders as there are for doctors, lawyers, and teachers, there is little doubt Northwest Tech will have a long and proud future equipping men and women for a promising workforce.