Northwest Tech has named Jay Bradley to serve as the 4th men’s basketball coach in the program’s history. Bradley, a Wichita KS native, will return to the sunflower state as the Mavericks work to build a competitive team in a dominant KJCCC Jayhawk Conference. “We are looking forward to welcoming Coach Bradley to the Northwest Tech team,” said Athletic Director Rory Kling. “Experience on the court as both a coach and his work with ProSkills EYBL, will help him recruit the needed talent to be able to compete in the Jayhawk conference.” 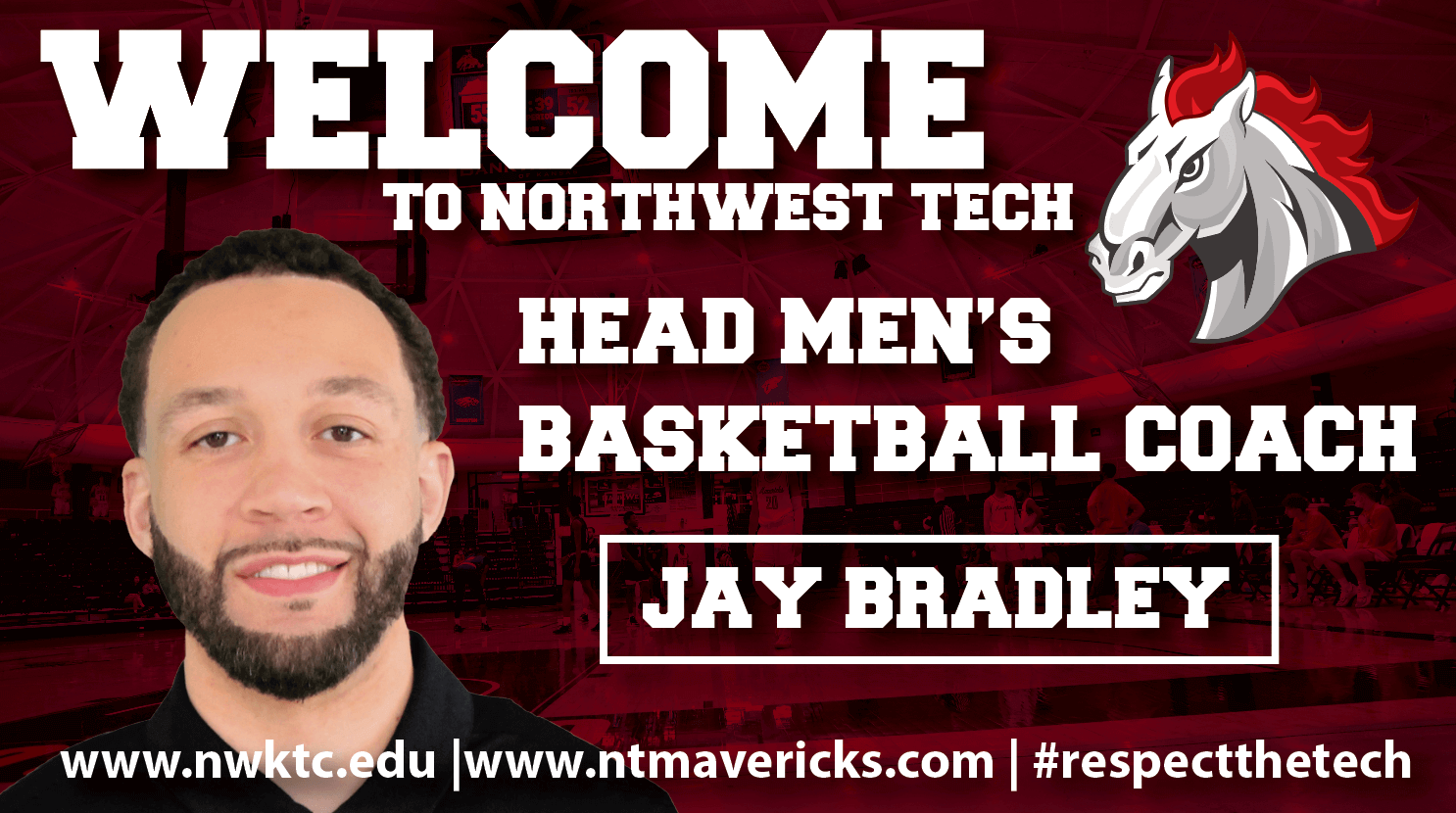 Coach Bradley has already hit the ground running to recruit incoming student-athletes for the 2021-2022 academic year. “It’s an honor to be named the Head Coach of this program,” said Bradley. “Northwest Tech immediately made an impression on me by showing the pride they take in their school success and the community.” The Mavericks are coming off a 3-18 record for the prior year and are looking to position the program for success. “We had several great conversations with Coach Bradley leading up to this point,” said NT President Ben Schears. “We feel he is a guy who is not afraid to jump in, work hard, and put in the effort to build a winning program.” When asked how he felt about getting started at Northwest Tech, Bradley replied “I look forward to building the Men’s Basketball program here at Northwest Kansas Technical College - Go Mavs!!”

Coach Bradley arrives at Northwest Tech with a wide variety of experience, having served most recently as an assistant coach at Clarendon College during the 2020-2021 season. At Clarendon, he had the opportunity to develop several all-conference players and wrap up a successful season. For the 2018-2019 and 2019-2020 seasons, Bradley served as the assistant coach with Odessa College. Bradley had a short stop at Quincy University during the 2017-2018 season, where he served as Director of Operations and recruiting coordinator for the program.

He remains active as a member of the ProSkills EYBL organization, contributing to every facet of the program. Currently, Coach Bradley is coaching 5-star athletes Cason Wallace, Cruz Davis, and Cameron Corhen.

During his time as an assistant at Odessa, he helped the Wranglers wrap up the 2018-2019 season with a 28-7 overall record, 14-2 in conference play, and a playoff berth in the National Tournament, where they made it to the Elite-8. They ended the season with the 7th ranked defense in the country. He assisted in developing current North Texas player and JUCO All-American James Reese and sent seven players to the Division 1 level. Successes continued during the 2019-2020 season, with student-athletes seeing significant increases in shooting percentage and overall skill development.

Before moving into collegiate coaching, Coach Bradley spent eight years running his own AAU program in the Wichita area, sending several kids to multiple levels and cultivating solid relationships throughout the Midwest that he has continued to maintain.