With the Northwest Tech softball season just wrapping up, two Goodland natives are officially taking the reins of the program. Kaitlynn Raile, Assistant Coach for the 2020-2021 softball season has been has been appointed to the Head Coach position while Athletic Director Rory Kling will be stepping into the role of Assistant Coach. “I’m excited to see our new coaching staff grow the program,” said NT President Ben Schears. “It’s a great opportunity to promote solid employees into positions and knowing they will grow and see success.” 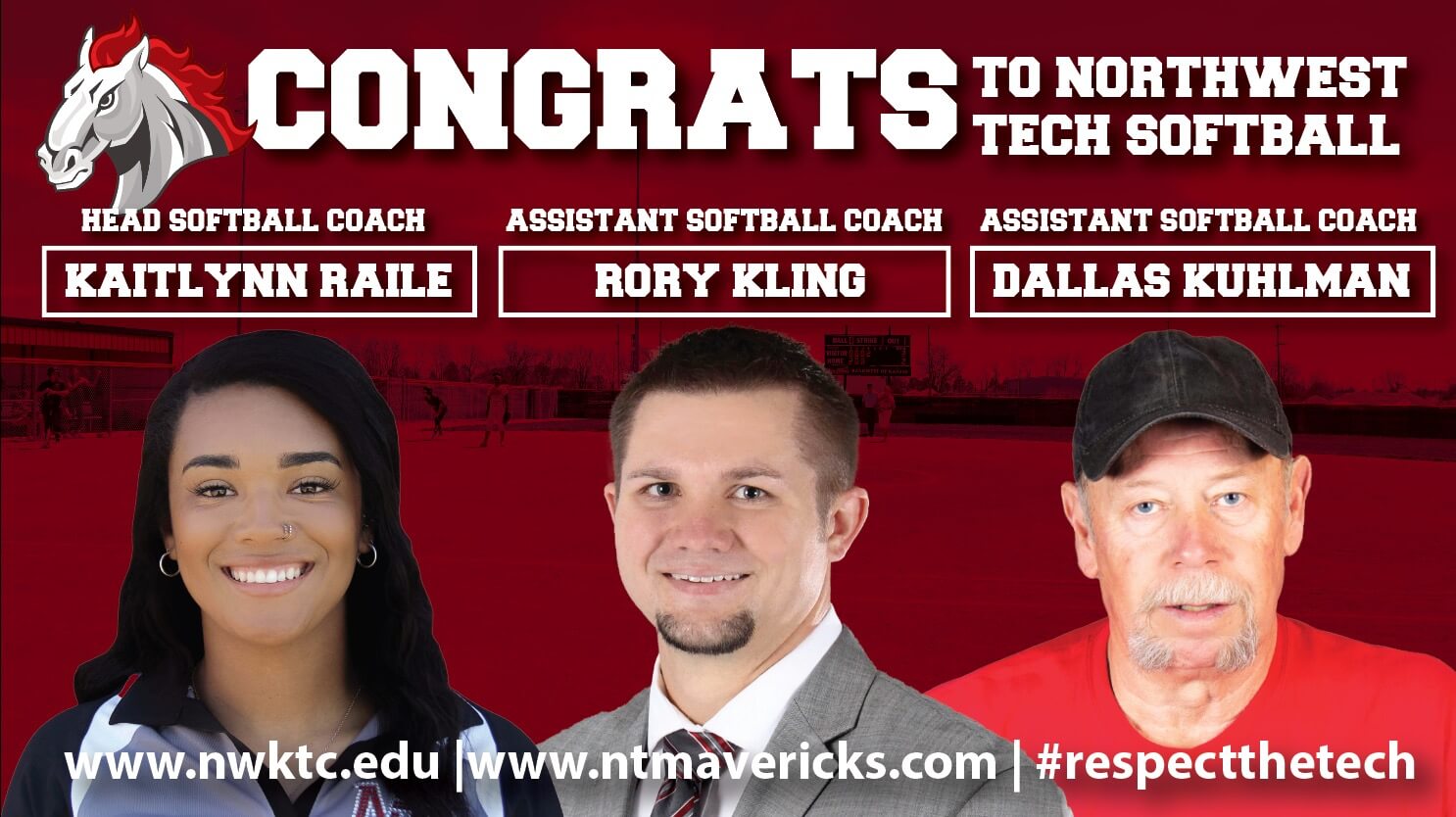 Raile and Kling join well-known Assistant Coach Dallas Kuhlman, who specializes in pitching and fundamentals and has been a part of the program since the first year. Coaching staff have been aggressively recruiting and preparing to develop the team for the next season. “I believe we have a lot of potential with several returning sophomores and a strong class of incoming freshman recruits,” said Raile. “I also feel very fortunate to have Coach Kling as a part of our coaching staff.”

After a mid-year coaching change during the 2020-2021 season, the trio stepped up and completed the year seeing fundamental and statistical improvements in performance throughout the season. The team saw significant jumps in batting average, on-base percentage, slugging percentage, runs earned, and home runs among other categories.

Coach Raile attended Northeastern Junior College following graduation from Goodland High School to study and compete in softball.  She returned to Northwest Tech for her sophomore year of college as a member of the college’s inaugural softball team.  During her time as a student at Northwest Tech, she earned an associate’s degree in Crime Scene Investigation and a technical certificate in Business Technology. Following graduation, she headed east to Missouri Valley College to continue her softball career and complete her bachelor’s degree in Business Administration. “I’m very honored to have been chosen as the new head softball coach,” said Raile. “I’m looking forward to building a strong foundation for the program and seeing what we can do this coming year.”

Joining the bench will be new Assistant Coach Rory Kling, who has served as the Northwest Tech Athletic Director since 2016. Kling, also a graduate of Goodland High School, attended Barton County Community College after graduation, earning an associate’s degree in Sports Administration. He was on scholarship to play baseball for Barton until a shoulder injury brought his athletic career to an end. His next stop was Fort Hays State University where he earned a bachelor’s degree in Recreational and Sports Management and a certificate in Leadership Studies. Following his college years, Kling was the Assistant Facilities Supervisor for Highland Ranch Community Association and worked in the Parks and Rec Department in the Denver Metro Area. After returning to Goodland and starting at Northwest Tech, he coached Goodland K18 baseball and was Head Coach for the 2017 season. “I’m proud to be a part of such a young program and being able to develop athletes and see them progress,” said Kling. “We have great cohesion between not only the coaches, but the players as well”.